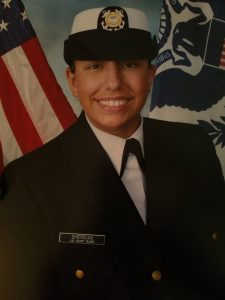 Cadet Sheridan was falling behind in school. She was lying, stealing and giving her teachers a hard time, just so she could go hang out with friends. One day, she came to the realization she needed to make a change. That change was the Commonwealth ChalleNGe Youth Academy.

Cadet Sheridan quickly adjusted to ChalleNGe, joining clubs such as the Drill Team, and was even Captain of the ChalleNGe Invitational Trivia Team.

Cadet Sheridan took her GED early, and passed with the highest score in the Class, earning Valedictorian honors. With extra time on her hands before ChalleNGe graduation, she even volunteered for extra Service to Community.

While at ChalleNGe, Cadet Sheridan also took her ASVAB, and scored very highly. Upon graduation, she joined the Coast Guard, where she was recently promoted.