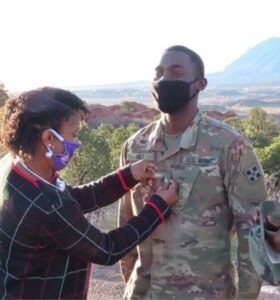 Cadet Hill graduated from CCYA in August of 2016. The leadership, motivation, and discipline he gained while attending CCYA propelled him into the United States Army. He enlisted into the United States Army as a Communications Repair Specialist (94E). Shortly after completing his training, he deployed to the Middle East, during his deployment he continued to excel and was promoted to the rank of Specialist. He and his mother have attributed his success to the coaching, mentoring, and leadership of the Commonwealth ChalleNGe Staff. He was recently promoted to the rank of Sergeant (E5) earning the distinguished title of Non-Commissioned Officer.

A quote from Cadet Hill’s mother Katrina Strand “I’m truly blessed for the journey he took while at ChalleNGe as it helped him grown a bit and mature. Continue to mentor and build up our young men. To those considering or entering the process… TRUST THE PROCESS!!”